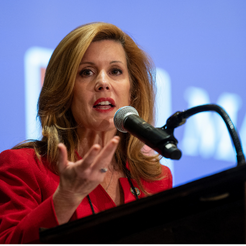 “We speak with one voice,” Laura Price told the audience gathered at the Maryland Association of County’s Winter Conference inaugural banquet on Dec. 9, where she was installed as president of the organization’s board of directors.

“There is no large county or little county. There is no urban and rural, and it doesn’t matter how many zeros are at the end of our budgets,” the Talbot County councilwoman explained. “When we speak with one voice, it’s the truth. That is what makes MACo the most respected voice in Annapolis.” 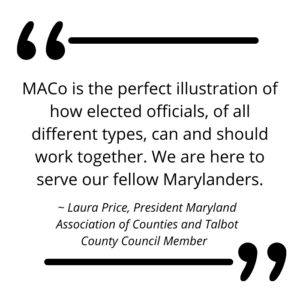 The Maryland Association of Counties (MACo) is a nonprofit advocacy organization that expresses the needs of local government to the Maryland General Assembly. Price assumed the top leadership role after many years of work and preparation.

A Talbot County business owner, Price first ran for office in 2010 and is now in her third term. She has served as Talbot County’s legislative liaison to MACo since 2015 and has held a number of offices on her path to the presidency.

Price says she first ran for office “to make a difference,” and she counts her service to MACo as one of her crowning achievements. More importantly, she believes it has made her a better leader for Talbot County.

“It has changed the way I think,” Price says. “MACo is the perfect illustration of how elected officials, of all different types, can and should work together. We are here to serve our fellow Marylanders.”

Prior to every legislative session, the Maryland Association of Counties and its board of directors sets four specific legislative initiatives that they pursue together. Those include:Reinvest in local transportation infrastructure. The State of Maryland reduced the local share of Highway User Revenues (HUR) during the recession, and funding to counties still lags behind what they previously received. Restoring local Highway User Revenues (HUR) is a top priority. 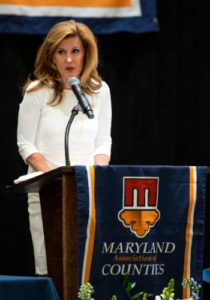