Happy as a Clam: Local Company Top Producer of Clams 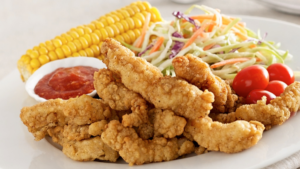 If you enjoy a steaming bowl of clam chowder or succulent fried clam strips at your favorite restaurant, chances are you’re eating clams caught by and processed at one of Easton-based Sea Watch International’s four processing facilities.

“We’re fortunate to be in almost any seafood establishment that serves clam chowder,” says Bernie Carr, vice president of business development. “If you’re eating clam chowder anywhere in the USA, the majority includes our clams.”

Birth of a Powerhouse

Sea Watch International was founded in 1978 and has continued to grow through a series of acquisitions. Today, they’re a Goliath in the food service industry with products distributed through major distributors including Sysco and U.S. Foods, in addition to many of the Top 100 restaurant chains across the country. They also sell clams to companies such as Campbell’s and Progresso that use them in their own products.

Though headquartered in Easton, the company has four independent locations that process the company’s extensive line of frozen and canned clam products; from clam chowder and breaded clam strips to chopped clams and clam juice.

While more than 100 species of clams can be found in U.S. waters, including some in the Chesapeake Bay, Sea Watch International harvests and processes both sea clams and ocean clams.

The sea clam, also known as the Atlantic surf clam, is caught in waters up to 120’ in depth and is the larger of th 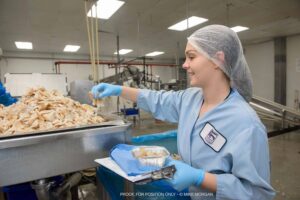 e two species. They reach maturity in five years, are harvested at 5 to 7 inches in length, and are prized for their mildly flavored, tender meat. The Easton facility processes 6 million pounds of clam strips each year from sea clams.

Quahogs, or ocean clams, are found in waters up to 200 feet in depth. They grow slowly, reaching maturity in 40 years, and can live for more than 200 years. In 2006, researchers documented a clam found off the coast of Iceland to be 507 years old, surpassing the oldest ever found by 101 years. You can tell the age of both species by counting the rings on their shells.

A quahog’s meat is firmer and has a more robust flavor. Most of the meat from this species is canned and used for red chowders, tomato-based sauces, and gumbos. In Easton, they’re used to make stuffed clams for the food service industry.

“Surfs have a sweet taste to them whereas the quahog is a darker meat and has that big robust taste,” Carr explains. “On the East Coast, usually in the New England area, people love that taste. If they’re not eating a quahog, they’re not eating a clam. I’m out of South Jersey, and I like that sweeter, lighter flavor.” 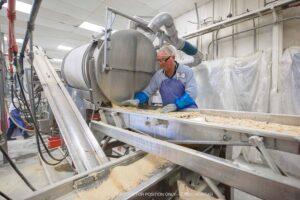 With 20 boats, Sea Watch International also owns the largest fleet of clam vessels in the world. They fish U.S. waters offshore from Virginia up to Georges Bank in New England. Just like crabs and oysters, fishing for clams is regulated by the federal government.

Every cage is tagged with information including when and where the clams were caught, plus the name of the person captaining the ship. The FDA inspects the factories once a year, staging mock recalls to make sure the system is sound.

What’s more, Sea Watch is dedicated to maintaining a sustainable population of clams.

“The government gives us an allocation so we don’t over fish the industry, but we don’t catch our limit,” Carr explains. “The nice thing about this is we have the ability to grow. If one of our customers wants to come out with a new product, we can support them.”

Bob Brennan, the company’s president and owner, says Sea Watch International has been a leader in helping to establish best practices in fisheries management and in their state-of-the-art factories.

“We take surveys every year to make sure that the resource is not over fished and that it’s sustainable,” Brennan says. “Nobody’s interested in not having enough clams going forward. Our customers want to know that we are not overfishing and that we’re good for the environment. People look for that now.”

In addition to clams, Sea Watch International continues to search for new business opportunities. The company has been working on a project for more than a year with Beth Brewster of Caroline County Public Schools and Roxanne Wolf of Shore Gourmet, along with many other businesses and state agencies, to create value-added products from Chesapeake Bay blue catfish.

“Our lead product is a blue catfish cake that can be prepared in the schools and other state facilities,” says Guy Simmons, senior vice president of marketing and product development. “The Chesapeake Bay blue catfish is an invasive species and a veracious eater which wreaks havoc on the delicate balance of the Bay’s ecosystem. By adding value to this fish, watermen have an incentive to catch more of the fish and remove them from the ecosystem and helping restore balance.”

Like every employer these days, Sea Watch is feeling the impacts of the labor shortage and the restrictions on restaurants during the pandemic drastically impacted sales. They currently are operating one shift with approximately 120 employees, many placed by an in-house agency.

These and other opportunities help Sea Watch remain committed to Easton as their home base. “I want to say that Easton has been a great place for us,” says Brennan. “This is our headquarters, and we have this plant here.  We support our community as many ways as we can.”