Douglass Mural to Be Unveiled in Easton on September 4 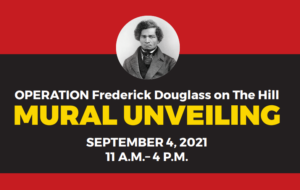 A new piece of public art featuring Frederick Douglass and his wife Anna Murray Douglass will be unveiled in The Hill Community in downtown Easton on Saturday, Sept. 4, at 3:30 p.m.

The 27 ft. by 9 ft. mural will be displayed on a newly constructed wall that faces the Easton Rail Trail on the property of Solid Tops, a local company that makes countertops at 505 South Street. Douglass descendants from the Eastern Shore and across the country will attend the ribbon-cutting ceremony.

Organizers also are planning a community celebration featuring D.C.-based R&B band Push Play and a host of local musicians that will begin at 11 a.m. at the gazebo at Idlewild Park. This event will end promptly at 3 p.m. to allow visitors time to walk to the mural, which sits several blocks away.

Tarence Bailey Sr., five times great nephew of Douglass and a military veteran, has been the driving force behind the creation of the mural. Though he now lives in Trappe, Bailey grew up in The Hill Community. He knows well the stories of Douglass and his return to The Hill to dedicate both churches in the community after achieving international notoriety as an abolitionist, writer, orator, and statesman. 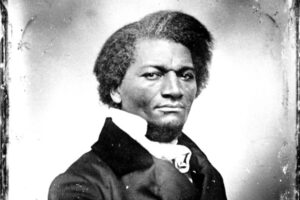 In 2019, Bailey shared his dream of seeing a mural installed in The Hill Community with family friend Michelle Garcia-Daniels of Rochester, NY, while giving her a tour of the Eastern Shore. In early 2021, Garcia-Daniels donated the money to have Cambridge muralist Michael Rosato paint the mural. Rosato won acclaim for his engaging depiction of Harriet Tubman in Dorchester County.

“I felt like Douglass was saying, ‘Read my word,’” Rosato says, explaining his inspiration for the mural. “The mural depicts the things that made him who he was and the things that he influenced after he became that man. It’s a very American story.”

Bailey believes the time is right for the installation of the mural. “People are looking back at my uncle and reading his words again, and they are saying how much of a conscience he was for the nation,” Bailey says. “Douglass called out the hypocrisy. He called out the wrongs, not just for African Americans, but also for Native Americans and women. He was a champion for all people.

“A lot of people now are asking, ‘What would Frederick Douglass do?’ and they’re quoting him in the halls of Congress,” Bailey continues. “It’s time Talbot County honored Frederick Douglass the right way.  There’s no better honor than being honored in your own home.”

While the date for unveiling corresponds with the Labor Day weekend, it also has special meaning to the Douglass family. September 3 marks the 183rd anniversary of Frederick Douglass’s self-liberation from Baltimore. He boarded a train bound for Philadelphia dressed in a sailor suit stitched by Anna, who grew up in Caroline County, but met Frederick in Baltimore. 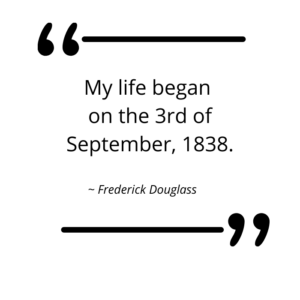 “My life began on the third of September 1838,” Douglass wrote. “On the morning of the fourth of that month, after an anxious and perilous but safe journey, I found myself in the big city of New York, as a free man – one more added to the mighty throng which, like the confused waves of the troubled sea, surged to and fro between the lofty walls of Broadway.”

Both events will take place on Sept. 4, rain or shine. For more information about the mural project, visit the Operation Frederick Douglass on The Hill Facebook page.

Douglass Mural to Be Unveiled in Easton on September 4