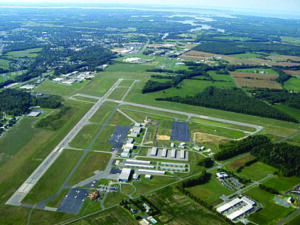 Exciting things are going on at Easton’s Airport thanks to a $1.6 million grant from the Federal Aviation Administration.

“This grant, which comes from the Airport and Airway Trust Fund, will allow us to modernize and improve safety and efficiency in our operations and create more business opportunities for the airport.” says Airport Manager Micah Risher.

In 2005, the FAA adopted new design standards for airports which increased the required runway safety area. Through an exhaustive 12 year environmental assessment, the airport and county officials developed plans to improve the primary runway safety area to meet the new requirements.

The first phase of the approved plan calls for removing trees from the Talbot County Business Center property, formerly owned by Black & Decker. Select properties on Hazelwood, Brooks, and Commerce Drive will also have trees removed. Property owners are aware and have given permission for removal. The process began on Sept. 14 and will take approximately 75 days. 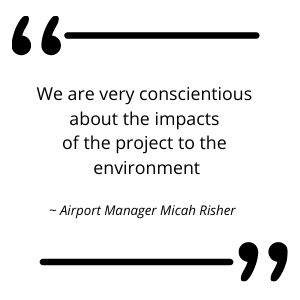 Business Center to prepare for the new safety area and the addition of approach lights to this area of the airport. Eventually, the airport will also replace the 1950s era Instrument Landing System, repave areas of the runway, and restripe the runway.

“We are very conscientious about the impacts of the project to the environment,” Risher explains. “We have paid appropriate fees into the Town of Easton’s Forest Conservation Act to ensure trees are replanted, and we also created nearly 11 acres of new wetlands in the county in 2019.”

Risher created a new webpage to keep people informed about the project: https://eastonairport.com/projects/

The airport was established during WWII as a reserve airstrip. Over the years, it has grown to become one of the busiest general aviation airports in Maryland.

Financially, the airport is completely self-sufficient. No tax money has been used to 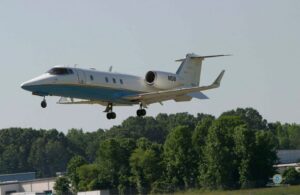 support the facility since 1992. A study by the Maryland Aviation Administration shows that the airport has a huge economic impact in the area. It generates $48 million in business revenue annually, $6.6 million in state and local taxes, and $10 million in airport revenue. It also supports 498 jobs in and around the airport, although the airport itself has only five employees.

When asked how all this revenue is generated, Risher says the answer is simple businesses that operate out of the airport and refueling operations but are not readily seen by the general public. A number of local businesses base their operations at the airport, and it’s a frequent stop for planes that need to refuel.

“If you look at any thriving area, you’ll find it has three things, and one of those is an airport,” Risher explains. “Easton’s airport is a valuable asset and will continue to be a source of opportunity for the area.”

Risher was born and raised in Talbot County and takes a lot of pride in the airport. After high school he joined the Navy where he became an air traffic controller and served aboard the aircraft carrier USS Eisenhower.

After 10 years in the Navy, Risher pursued a career in civil air traffic control and aviation management. He worked at several small airports and eventually landed at FAA Headquarters, which gave him valuable insights into the operations of small and regional airport operations. When the job managing Easton’s airport opened in 2018, he couldn’t resist the opportunity to guide the future of his hometown airport.

In 2019 Risher started an Aviation Career Education program to provide students the opportunity to explore careers in the aerospace industry. According to Risher, aviation careers are understaffed nationwide and some require little or no college. The field is growing, and Risher hopes to grow his program.

“Our ACE program is supported by donations,” Risher explains. “Our non-profit partner is The Mid-Shore Community Foundation.”

Risher sees blue skies ahead for Talbot County and the airport. “Talbot County is a special place, and I am proud to be part of a vital county asset, its airport,” he says.